Skip to content
John Walker is a Sarah Lawrence graduate who really likes the internet a lot.
When I heard that this month’s theme was “Firsts,” my mind immediately jumped to this image. 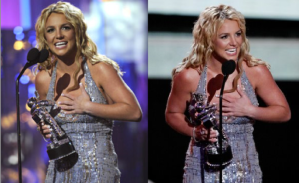 Is this also the first televised breast self-exam?  Britney Spears, always the trailblazer.
(As an aside, did someone tell BritBrit about Re/Visionist’s “Firsts” theme? She’s schilling for us pretty hard: “I first wanna thank God, first and firrmost firr…“
Speaking of award show firsts, my mind also kept returning to Halle Berry’s historic 2002 Oscar win.  As the first black woman to win the Academy Award for best actress, Berry’s acceptance speech is SO moving; you can really see her trying to process being the first black woman to win the award.

Almost enough to make you forget about Catwoman.

JK, Halle, you know I love you.  Catwoman never happened.

Moving away from these significant, cultural firsts (and also Britney Spears), there are also those more personal firsts that we all experience at some time or another.
There is of course your first time.

Or perhaps more powerful, or at least more scarring, there is also your first sexual humiliation.
“That’s the ticket!” says Jason Biggs. 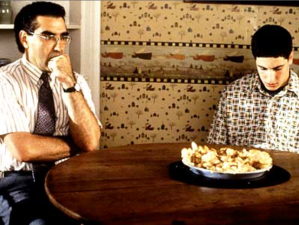 I think we can all, unfortunately, agree.
Some firsts, like the above, you might forget on purpose. (Support your local therapists – Repress! Repress! Repress!)  Other firsts may be forgotten simply because they occur before you develop consciousness, like your first word.

Apparently Maggie Simpson had already developed a sense of style, however.  BOW LOOKS GOOD, BB!
Soon, you grow up, stop being such a little freeloader, and get your first job.  Hopefully, this first is a little more Almost Famous… 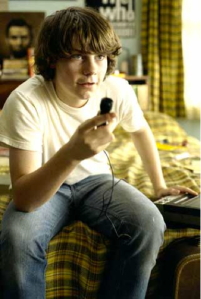 …and a little less A Little Princess.

(Side note: Doesn’t Sara Crewe look positively witchy in the above shot?  I’d drink of that sister! The Craft reference, FTW!)
And of course, you can’t forget about your first kiss.

Ah, if only mine could’ve been this precious.  And not in a basement.  Also, I wish someone had taught me how to properly French kiss.  TMI?  Whatever, I feel like we’ve grown close over the course of this visual essay.