{John Walker is a Sarah Lawrence graduate who really likes the internet a lot.}

When I was in college, (oh, is that weird to say in the past tense) I always strove to maintain a neutral voice in my academic writing.  Nothing was monolithic; my perspective was never universal.  Well, I’m not in school anymore, and if there is one subject to whom I can ascribe absolute essentialism, it is Beyoncé.  Drawing on entirely anecdotal evidence, she is the pop-cultural icon of our times.  By “our,” I mean “my,” and by “anecdotal evidence,” I mean WHATEVER JUST GO WITH ME.

The following is an account of eight moments in which Beyoncé has defined my personal narrative.  My experience is your experience.  Enjoy! No doubt coupled with the waning influence of Marilyn Manson, my parents finally unblocked MTV at home.  Destiny’s Child’s “Say My Name” was in heavy rotation on the network.  By “heavy,” I mean a 30 second clip of the video daily on TRL, which is actually pretty heavy in comparison with the “Music Television” of today. [Cue The Price Is Right horn!]

With Beyoncé anchored front and center, Destiny’s Child conquered both the fake TRL charts, and my real pre-gay heart.  Say her name, I did.  I remember one embarrassing mid-flight exchange with another unaccompanied minor regarding how much we both just LOOOVED Beyoncé.  “I want Beyoncé to be my fiancé.”  I thought I was sewww clever.  I think the fact that I spent an entire flight from Boston to Puerto Rico gushing about how fierce Beyoncé is negates any of the heterosexuality my then 11 year-old self was fronting.  If not that, then definitely when I got mad because the other kid TOTALLY didn’t believe me that Farrah Franklin got kicked out of the group.  Because, really, duh. I just. Duh. You know? Right? Duh.

Following her groundbreaking acting debut in MTV’s Carmen: A Hip Hopera, Beyoncé set her sights on the silver screen.  As Foxxy Cleopatra in Austin Powers in Goldmember, an independently produced art house period piece, Bey really tapped into Foxxy’s psyche, begging the question of what it really means to be “a whole lot of woman.”

In retrospect, this melding of Austin Powers and Beyoncé represents such a pivotal shift in my tastes and interests.  The former symbolizes my youth, my irrepressible childish tittering at hearing the words “penis enlarger.”  The latter evokes my burgeoning queer sensibilities and love of strong, artistic women.  I’m not saying that I came out the next year because of Beyoncé, but I’m also not not saying that.

Beyoncé… Hmm… This is odd.  It seems like the records from these years have been destroyed.  I’ve searched up and down the shelves at the John Walker’s Precious Moments Private Library, but all I can find is information on Siouxsie and the Banshees.  And black hair dye.

Ah, here we go.  In 2007, I received my first Beyoncé album, the deluxe re-release of B’Day.  This was the year that my perspective on my musical interests underwent a decisive shift.  After years of publicly shunning pop music, only to blast “Toxic” behind closed doors, I embraced the genre.  Pop music is engineered to be enjoyed.  It is just plain silly not to admit that basic truth.  Lambaste the grossness that is the mainstream music industry, sure, but to deny the catchy-by-design nature of the songs it produces?  Come on, twee-ty bird.  In the eternal words of Kylie Minogue: “You’re getting boring.”

Moving back to our baBey, I feel like the B’Day era was the first time in which Beyoncé really began to assert her developing artistic vision of self.  Whereas Dangerously in Love produced a string of pop hits, it comes across as a collection of hit singles meant to launch a career.  Conversely, B’Day’s lead video for “Déjà vu” features a sultry Bey, swirling in her building insanity.  No back-up dancers.  No explosions.  Just Beyoncé, her voice, and her moves.  Ungh.

If B’Day marked the “rebirth” of Beyoncé as a solo artist, I Am… Sasha Fierce established her as more icon than pop star (more Liza than Britney).  I do not say this as a testament to the music contained within the album. I actually find B’Day to be far superior to the somewhat disjointed 2008 effort.  What leads me to this conclusion, however, is the shift in Beyoncé’s overall presence and presentation.  “Single Ladies” masterfully combines old-school choreography with new-school viral sensationalism, allowing Beyoncé to showcase her strength as a performer.  This was when she convinced me that she will continue to pack arenas for decades to come.

“Single Ladies (Put a Ring On It)” (which is apparently the full title) also resonates with me on a more personal level.  Not to get too heavy, but I first saw the music video the night before a close friend died.  I remember thinking how pissed I was that I’d never get a chance to watch the video obsessively with him.  He was the guy who reinvigorated my passion for certain contemporary pop artists, Beyoncé included, while simultaneously turning me on to Bikini Kill’s “Suck My Left One.”  I know we would’ve had a lot of fun shrieking about this on YouTube.  No doubt due to his influence, I began thinking of a senior thesis concerning the connections between Riot Grrrl and Beyoncé.  This never got off the ground because it was based on a) “I LOVE BEYONCÉ” and b) she performs live with an all-female band (which Kathleen Hanna notes in this interview).  But hey, being a shameless fanboy isn’t stopping me from writing this article, so…

The most monumental of monumental events happened in 2009.  I don’t think that I can encapsulate all of the emotions swirling around in this memory.  All I can muster is a haiku:

This was my Mecca

Huh.  Another missing section in my an-Knowles.  All I see is “Courtney Love is really significant because…” this and “YOU JUST DON’T GET COURTNEY LOVE BECAUSE…” that.  I guess this reflects the blessing and the curse of Beyoncé taking three to four years off between albums.  She returns with high quality music, videos, and live performances, but leaves a huge power vacuum that needs to be fed in her absence.

Aaaaaaand, we’re back.  I cannot get over how impressed I am with Beyoncé’s new album, 4.  From start to finish, it is one, cohesive work.  The twelve solid tracks leave no room for filler.  The lyrics are simple, but what Bey does with her voice is anything but.  All of the vocal weirdness and unconventional riffs that I’ve heard her play around with in her live performances are finally added to the official album tracks. (For examples of what I mean listen to 2:50 – 3:16 on “I Care,” as well as 0:00 – 0:04 of “Countdown”)  To those who were turned off by “Run the World (Girls),” I recommend listening to it in the context of the album, specifically following the preceding track, “I Was Here.”  Coupled together, the lead single takes on a new meaning, one that celebrates the girls and women who will inherit a post-Beyoncé world.

I guess I’ve just really appreciated Beyoncé’s evolutionary album coinciding with this next evolution in my own post-grad life.  We work really well together, you know?

Tune in next week, when I discuss the impact of “Single Ladies” on Queen Elizabeth I’s life as the Virgin Queen. 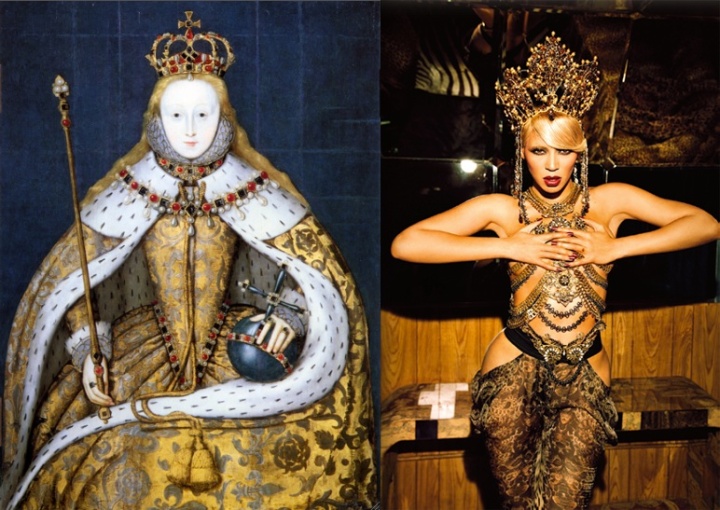