John Walker is a Sarah Lawrence graduate who really likes the internet a lot. 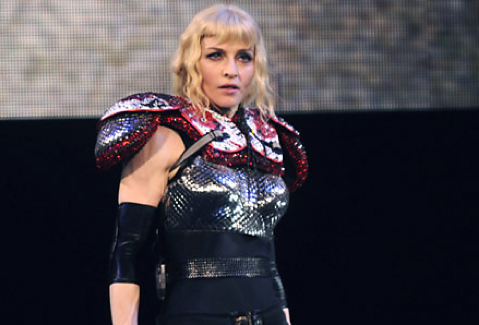 Yeah, so, bring a book. I was gonna write something that would oh-so-subtly lead you from the theme of sports to the actual subject of my post: halftime shows. Then, I realized that I was really down to the wire in getting this piece in. Ok, so whatever, I still was totally set on my theme! AND THEN Gawker, by way of Deadspin, decided to rank every halftime show EVER on the Kinsey scale, as in assigning it a 0-6 as determined by its dad-rock to sequined riffs quotient.

Brilliant! Unless you’re me, right now. So basically, I’m not gonna fuck around with you. I’m gonna get right to the point and state loudly and clearly: I’M WRITING ABOUT MADONNA, AND YES, IT’S RELEVANT TO SPORTS. OH, AND, LET ME COUNT THE WAYS.

*ALSO I JUST NOTICED THAT I’M REALLY INTO COMMAS ATM [at the moment, not automated telling machine, IF THAT’S EVEN FOR WHAT IT STANDS #whatsgoogle]. FOR THE SAKE OF THIS PIECE, LET’S JUST SAY IT’S MY “STYLE.”* 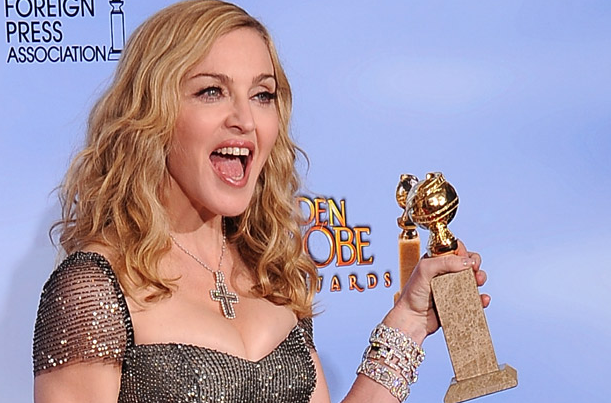 1. Coming off of her Golden Globe win for Best Original Song, Madonna continues her comeback at the Super Bowl halftime show. Along with a medley featuring her classic hits “Ray of Light,” “Vogue,” “Music,” and “Holiday,” “The ‘Donz” [as nobody calls her] will publicly premiere her soon-to-be released single, “Give Me All Your Luvin’,” featuring Nicki Minaj and M.I.A.

This combo intrigues me, as the  ménage evokes 21 flavors of nihilism in quite unique ways. Madonna’s, while originally landing on the more hedonistic side of things, has, since 1998’s pivotal Ray of Light, performed in a cool and almost emotionless persona. M.I.A. is quite similar in her delivery, never seeming to be “trying,” so to speak, when she approaches the listener. It’s in her musical composition, especially on MAYA, that she speaks to a certain destructive quality, what with chainsaws as actual instruments and the like. More performative in her nihilism is Minaj, at least when in her Roman persona. Hers is a much more literal interpretation of destruction, which when coupled with such stony personas as Madonna and M.I.A., makes for quite the intriguing grouping.

2. As for the single itself, “Give Me All Your Luvin'” is still givin’ me 21 flavors of tingles [is this my “thing” now? ugh fml whatever I stand by it], even nearly four months following its unofficial leak.

In case you don’t know the full deal, here’s a super brief summary: someone fan in Spain leaked the song in November, litigation ensued, and most importantly John’s had a demo copy of the single to jam to since late fall.

While not a revolutionary new step in her musical evolution, I feel like “Give Me All Your Luvin'” expertly blends together the first two periods of Madonna’s career in a seamless, effortless way. When I listen to the song, I hear hints of “Burning Up” couple with an overall undertone of “Beautiful Stranger,” and yeah, perhaps the kinetic feeling of “Ray of Light.” Using “Madonna” as a framework through which to create new work, the eponymous songstress is thrillingly post-modern, or rather, post-Madonna.

4. Madonna’s probably going to wear fingerless gloves and/or long sleeves, because the world can’t handle the fact that she has really veiny, “unfeminine” arms. It’s really quite silly, because these underlying aspects of her physique are only visible because A) she’s in really good fucking shape, and B) the cul-tcha DEMANDS that she be so toned in the first place simply to remain relevant. It’s like, nobody would care about her if she didn’t keep herself in a sinewy state, and yet all she gets in return is: “GO HOME GRANDMA GAGA FOREVSTAT!!!!” 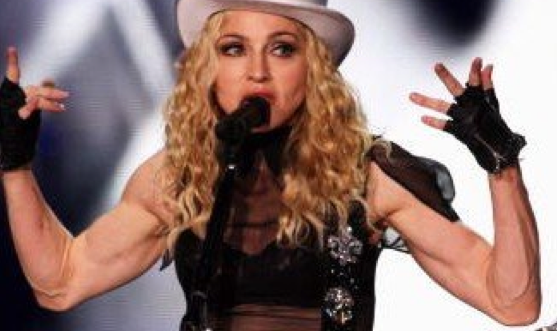 I would love to have that kind of muscle definition, but eh, I’m pretty happy with most of my arm-lifting being related to pouring more cabernet.

Whatever, what I really wanna talk about is: FINGERLESS GLOVES AT SUPER BOWL HALFTIME SHOWS. BECAUSE. It reminds me of what Britney Spears wore at the 2001 extravaganza, AND BY EXTENSION, what was considered cool to don at the time. I’ve been cooking this in-retrospect theory about popular fashions from late 2000 to mid-2002, and it goes something like: “DON’T WEAR ANYTHING ON YOUR DECOLLETAGE, CLEAVAGE, OR MIDRIFF. INSTEAD, DO WEAR FABRIC OVER YOUR ANKLES, WRISTS, AND ARMS.” Here are some visuals.

4. I’m really interested to see Madonna re-assert herself in a post-Lady Gaga music context. FIRST OF LET ME SAY NO DUH, LADY GAGA IS ALREADY ASSERTING, OR RATHER INSERTING HERSELF INTO A POST-MADONNA WORLD, WHICH IS A POST-THIS PERSON, POST-THAT PERSON WORLD ANYWAY. But come on. In a culture whose memory exponentially dwindles by the year, this is for all intents and purposes a “post-Lady Gaga era.”

Released in 2008, Madonna’s last album, Hard Candy was released four months, to the day, before Lady Gaga’s The Fame, at least according to Wikipedia. Gimme a break, I don’t go to school anymore. BYE BYE, CREDIBLE SOURCES TO BACK UP THE WORD COMING OUT OF MY MOUTH.

Especially considering Madonna’s recent 20/20 interview, during which she stated that comparing Lady Gaga’s “Born This Way” with “Express Yourself” was, in her words, “reductive,” I’m interested how she fares.

About Madonna’s “reductive” comment, I can understand it two ways: A) Yes, “Born This Way” is a reductive reinterpretation of “Express Yourself,” seeing as how Lady Gaga is taking in many ways the rubric set forth by her predecessor and yet not quite delivering the punch; and B) The question itself – “Is Lady Gaga copying you, Madonna?” – is a reductive manner in which to view pop culture, female icons, and even interviews, seeing as how the interviewer [WHO DIDN’T EVEN KNOW WHAT REDUCTIVE MEANS] could have asked Madonna ANYTHING, and she focused on “Is Lady Gaga copying you?”

5. I’ll work on being coherent, should we meet again.