{Brianna Leone is a 2nd year graduate student at Sarah Lawrence College. Her favorite method of procrastination is to find new television obsessions in which she invests too much of herself. She is hoping that someone will enable her television addiction with related employment after her graduation in May.} 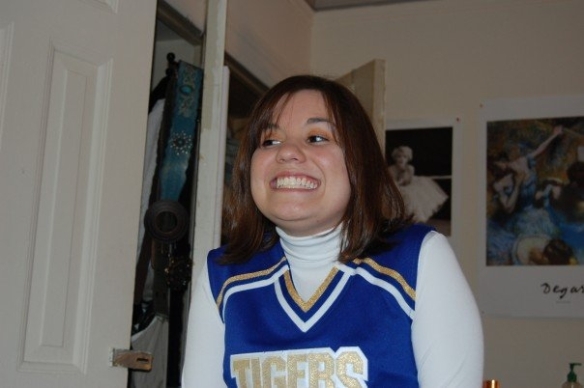 {Yes, I stole my uniform and used it as a last minute Halloween costume my first year of college. No, my face does not normally do this.}

Confession: I was a high school cheerleader. This is not how I imagined introducing myself to the readers of Re/Visionist but there it is. Don’t misunderstand me; I loved being a cheerleader and (mostly) enjoyed my time with my teammates but “Cheerleading Captain”, a title I held for four years, was not one that ever matched up with my personality. I think most people who learn this factoid about my past wonder if my affinity for sarcasm has reached new heights and this revelation is part of some elaborate prank. (Actually, I think most of my high school peers thought the same thing but it was more believable when I was standing in front of them in a skimpy blue and gold cheerleading uniform with TIGERS printed across my chest and ass.)

It is a part of my life which is now basically nonexistent. Considering the seriousness with which I approached the sport over six seasons and four years, I dropped it with more swiftness and eagerness than I anticipated I would once I began my first year of college. With no regular contact with my former teammates or coaches, other than the occasional Facebook message or – I’ll admit – nostalgia-induced intoxicated SMS, it is sometimes difficult for even me to remember the zeal I once had for cheerleading (or that I participated in the sport at all). But when tasked to write a piece for R/V’s Sports issue this month I was remembering more and more the marginalization I witnessed and experienced in relation to the female-aligned sport.

I will note here that cheerleading was a solely male sport from its creation in 1898 until 1923. But it was not until World War II, with the absence of men, that women’s squad presence began to dominate the sport. It was women who brought athleticism to cheerleading with tumbling and stunting; their inclusion, however, was contingent upon classmate votes rather than ability, thereby establishing a foundational correlation between female cheerleaders and popularity. The impression of cheerleading as key to entry into the upper echelon of high school social hierarchy was not indicative of my time as a participant of the sport. It was just the opposite, in fact. At my small rural/suburban hybrid school in Northern Westchester County, New York, football did not exist and neither did cheerleading. It was announced that if there was enough interest a winter squad would be formed to support the men’s basketball team. One of my best friends thought it would be fun and I was a gymnast when I was young and spry so I figured, why not? That friend is actually the only reason I committed to stay on for the entire season; after two weeks I thought I could not possibly last an entire season at this but she pleaded and I caved. One week later she and I were both named Captains and I begrudgingly fell in love. If I had not, I would have been forced to give up on it much sooner than I did.

To state the obvious, starting a new sports team is hard. It becomes even harder when cultural preconceptions regarding its participants paint them as airheaded and loose girls who are so desperate for attention that they have found a school-sanctioned excuse to parade around varsity boys in too-short skirts and are so self-involved that they could never comprehend what it means to be a team member. Convincing the community that we were legitimate athletes proved to be an uphill battle, one that I would fight for four years. 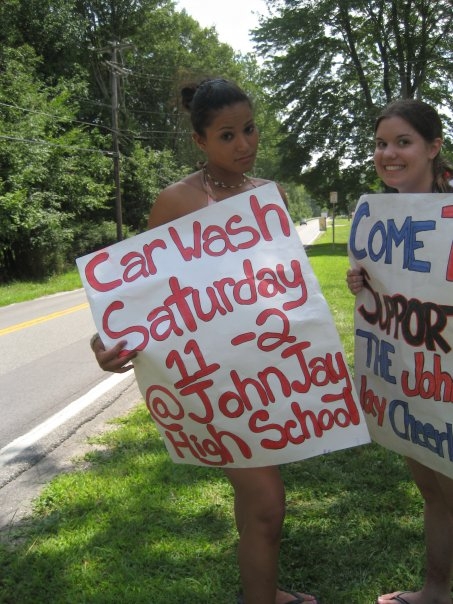 {During our Junior year my co-captain and I joined a neighboring school’s squad during the Fall season to cheer for the football team with which our high school was joined. She usually looked much happier than this and I typically did not have such crazy eyes.}

What time, distance and a sprinkling of maturity have helped me realize is that the constant judgments our team suffered (more frequently from faculty than from fellow students) was that we were subjected to ridicule not because of a lack of ability, but because of what we represented. Cheerleading was something to be mocked and although at its core the sport represents community and support, we were instead pushed to the fringes of our local athletic community. We were never given adequate practice space since we were considered to be of lesser value in comparison to other indoor (and some outdoor) sports; with whom we were in competition for the gymnasiums. In the first fifteen minutes of each practice we would reorganize the cafeteria to accommodate our team and drag poorly padded mats from the gym into our newly cleared space. The cafeteria became a hangout as other students waited to meet with teachers or for their clubs and athletics to start. As they loitered we were put on display as they made a game out of distracting and goading us. We were in the middle of a Catch-22: without better resources we could not improve as a team but we had no hope of convincing the Athletic Department that we deserved and needed more support. The distinction that we even needed to fight for the most basic of supplies and space in a district that never wanted for funds did not escape me either.

Most of the teachers and administrators that I came across never put their prejudice against cheerleaders bluntly—that is—all except for one specific physical educator. He seemed to get a certain enjoyment out of taunting my co-captain and I. Eventually it erupted into yelling—one day as we walked away from him—as we were still too fearful to directly challenge his authority as an otherwise respected faculty member at the school. I do not maintain any bitterness over this rivalry between student and teacher if, for no other reason, that little that occurred during my teenage years is worth holding a grudge over. Though, at the time, I found his dismissal of the 18+ hours a week I practiced (in addition to attending games in support of basketball players that he once coached) extremely irritating. Unfortunately I did not possess the rhetoric to properly articulate or discuss why I found his attitude so unacceptable and could not properly argue why he was wrong and I was right – because I was (and am) right. 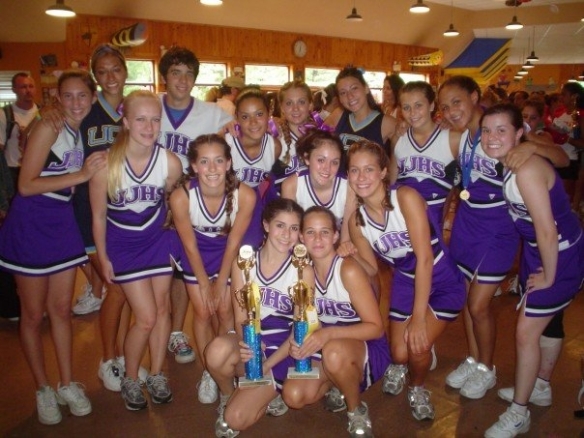 {With the Fall squad at John Jay, we attended Pine Forest Cheerleading Camp in the Poconos. This is part of the team shortly before we headed home.}

No other girls’ team would have ever been made to suffer for wanting to play as we had. And while we have been unique in that our team was so young, I am certain that we were neither the first nor the only cheerleaders to be marginalized; nor were we the only female athletic team to have to argue their legitimacy. With no dance or gymnastic team we were the only performers that also fell under the umbrella of “athletics.” But that was the crux of the argument. We had not been successful enough in our beginning years for our efforts to be considered real athletics. Especially as our team was not a feminized version of a male-sport, we became the other.

As a testament to the marginalization of cheerleading at my high school, the team was never featured in the yearbook and I am in possession of no team photographs. Essentially, outside of the memories of those involved, the existence of cheerleading in the mid-2000s at that school has been erased. Rampant conservatism in my hometown would most certainly reject my assertion that because our identity was rooted in our gender and we had no brother team to balance our existence in the school’s sports community, we were invalidated as an athletic team. Prejudices in my town are rarely publically proclaimed and so, no, there was never any blatant statement that the cheerleading squad was considered an inferior addition to the Athletic Department because it is deemed a wholly female activity and has no right to align itself with the likes of field hockey, baseball or soccer players. But I have yet to come across a better explanation for the substandard treatment I received in comparison to other student athletes. Although cheerleading does not consume my time or my thoughts the way it once did, I maintain that it gave me confidence and a sense of restless indignation, which, while frustrating at the time, has served me well since then. In fact, I am almost grateful to the close-mindedness that I fought in my own small way everyday growing up. I rarely won any of the small battles I took up but I was also never discouraged by the condescension and yielding to the status quo. After all, what good is a feminist without an internal balance of humor, passion and perseverance?