I hope you don’t mind if I call you Mitt – I don’t wish to be too casual or presumptuous, but I thought I should grant you at least the same level of respect as you have granted me and at least 47% (maybe as much as 99%) of my fellow citizens.

You might wonder why I am thanking you as we have never met nor do you have any idea whatsoever who I am nor, I suspect, do you care. Of course, I don’t blame you for that.  After all, you meet and deal with so many people, at springtime fundraisers for example, that a teacher, certainly one like myself who teaches women’s history, would not exactly pop up on your radar.

Nonetheless, I felt it important to tell you how grateful I am to you and those around you who so diligently keep in mind the needs and daily struggles and lives of some 1% of the population.

You and your cohort have brought up some extremely important issues. You have clearly delineated the importance of due diligence, that if rights are granted in a society built on hierarchy of sex/gender, race, class, how important it is that those most closely affected by the existence or non-existence of those rights, must ever keep a close watch on those rights! You have re-activated a growing level of commitment from those who feel personally affronted by racism, sexism, classism, homophobia, and just plain selfishness and meanness. You have reminded a good number of people that in a society of increasingly unregulated capitalism, the least economically powerful suffer the most, that helping each other out is a good thing, and that redistribution of wealth is maybe not such a bad thing after all and that some of the ideas that have been flying around during this election season might cause greater suffering for even more people should CERTAIN people be elected.

So obviously, I just can’t thank you enough!

P.S.:  Please pass along a special IN SISTERHOOD AND STRUGGLE high five to Ann! 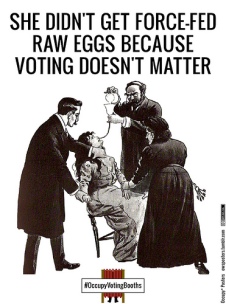 Rona Holub is a professor and the co-director of the women’s history graduate program at Sarah Lawrence College.