This visual essay is excerpted from a paper by Brittany Chevalier.

This visual essay examines the historical trend of American women’s empowerment, their body image, and how the media, who is ultimately run by the patriarchy, enforces the standards of beauty in culture. While women have experienced a sense of political, social and economic freedom in the public sphere over the past fifty years, they are still held as prisoners in their own bodies and expected to measure up to culture’s definition of beauty. In an attempt to maintain supremacy over women, the patriarchal and consumer interests co-opted and harnessed women’s newly liberated selves by bombarding females with emaciated images and making beauty something that could easily be bought and consumed. The media’s actions are actually two-fold by setting a near-unattainable model of beauty, then selling products to aid women in achieving these outrageous standards. The cosmetic, clothing, weight loss and food industries that advertise in magazines and on television see women as consumers and thrive off of their insecurities to maintain control. Exploring how the media uses the body and outward appearances as mechanisms to maintain order over women, this paper analyzes women’s body types, media images and ideals during the 20th century in America. In the process, women of all ages have sought to attain a look that will “empower” them. This empowered embodiment is as elusive and ephemeral as the changing ideals themselves.

Diaries of young women from the late 1800s expressed women’s goals of self-improvement
through their actions rather than through their bodies. However, other journals of young women from the Victorian era indicate a particular beauty ideal, focused on certain body parts such as waists, hands, and feet. Having larger hands and feet signaled that a woman was working all day in a labor setting and this represented a lower and unwanted class association. To visually change their form and make their waists seem as tiny as possible, women laced themselves into corsets. With the inability to move and even breathe, the corset made women reliant on others and submissive.

Turn of the Century: Emergence of Women’s Magazines

Women’s magazines have been a large indicator of how middle class women see themselves. At the turn of the century, the creation of many women’s institutions of higher learning, such as Wellesley, Vassar, Barnard, etc., led to the advancement of literacy and purchasing power of middle to upper class women. Women were leaving the comfort of a domestic, family life for a public, more independent existence. This brought the rise of women’s magazines, such as Harper’s Bazaar, Cosmopolitan, and Ladies Home Journal. Although these publications were initially based on editorials, this new era of women’s literacy was when women’s magazines took on advertisements due to the recognition of female purchasing power. 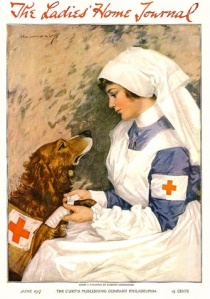 World War I: Left Out

In her book The Beauty Myth, Naomi Wolf writes that “Women’s magazines for over a century have been one of the most powerful agents for changing women’s roles…they have consistently glamorized whatever the economy, their advertisers, and, during wartime, the government, needed at that moment from women.” As more women were becoming educated and able to have conversations regarding intellectual topics and current events, magazine articles purposely left women out of central issues.

The Twenties and the New Corset

The initial years of the roaring 1920’s were a joyous, celebratory time for American women: the economy was thriving, the “Jazz Era” was in full-swing, and the radio aired its first show. But most importantly, women received their long overdue right to vote. The 19th amendment was ratified on August 18, 1920. This newly gained sense of autonomy for women led to other freedoms- especially social freedoms- that were infiltrated by American culture. Media and film encouraged a massive unveiling of the female body, which meant certain body parts like shoulders, legs and arms were displayed in new and shocking ways. The more the body was revealed, the more prevalent a standard existed for the way women should look, and this standard invited new beauty and dietary regimens that required money and discipline. American women and adolescents cut their hair short for the first time and traded in their waist-creating corsets for body corsets that flattened all curves. The resources women utilized to keep up their ultra-slender look benefited capitalist interests. When women decided to free themselves of superfluous garments, advertisers not only focused on the clothing but the ideal body these dresses would decorate.

World War II came to an end and in an effort to counter women’s desire to remain a part of the workforce, magazines swung more exaggeratedly back to domesticity than ever before. After tasting the short-lived occupational freedom that they had experienced, women were sent back to the domestic sphere and expected to settle for the role of mother and housewife. In the late 1940s and 1950s there was an interruption in the overarching trend toward slenderness, for women were highly valued for their roles as wives and mothers. The hour-glass figure, a more child-bearing friendly form, was popular once again, along with being busty. This matronly image of the time was considered “beautiful” because nothing was seen as more significant in women’s lives than getting married and becoming mothers.

While in the 1960s women broke through, as I like to call it, “the Formica ceiling” with a new sense of empowerment and autonomy through educational resources, economic opportunities, and contraceptive choices, consumer interests and the patriarchy also worked together to invent a new supremacy over women’s bodies. A new wave of post-women’s movement magazines, like Cosmopolitan, which showcased models like Twiggy, became popular in the late 1960s. These publications might seem to have a pro-feminist stance through its affirmations of female ambition and personal and sexual relationships; however, these magazines craftily created a formula to separate women. To dilute women’s solidarity in the liberation movement, these magazines made women into singular entities. What made Cosmopolitan’s and similar magazines’ formula so genius from the capitalist standpoint was the staggering use of beauty, weight-loss, diet and surgery focal points in articles. When a story concerning a troubled twenty-something’s long journey to lose those thirty unwanted pounds, an advertisement for diet pills or an exercise regimen would strategically be placed immediately after or alongside. The number of diet-related articles rose 70 percent from 1968 to 1972. Articles on dieting in the popular press soared from 60 in the year 1979 to 66 in the month of January 1980 alone.

The Seventies and Eighties: Sedating the Feminist

By 1984, 300 diet books were on the shelves. Today, women’s magazines use the same
mechanisms to capture a woman’s attention and proliferate the cult of thinness. As Wolf
writes, “Dieting is the most potent political sedative in women’s history”; it molds women
into submissive and apprehensive bystanders. Without the energy and fervor to overcome suppression, women will eventually give in to a society dominated by males and give up on their own aspirations. In the 1980s, women breached the power structure and today, almost 30 years later, we continue to climb higher and higher and more able to empower ourselves. Yet, today the quintessential shape women strive to achieve, compared to the muscular and toned body of the 1980’s, is the overly-lean, almost anorectic looking figure. 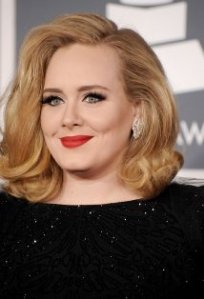 Not Victims: Overcoming the Beauty Myth
It would be unfair to label all women as “victims” in our culture when they themselves cooperate in what Hesse-Biber has called body rituals. “Like Mothers who tightened their daughter’s corsets,” today’s mom passes along the newest diet secret to her daughter or reprimands her for indulging in second piece of chocolate cake. Women may not even think that their advice is hurting the self-esteem or body image of their daughters, imagining that they are helping them get ahead or advance in our capitalistic culture. It is so embedded in our society that to be taken seriously in the political, economic and social arenas, women must first fit the ideal image. 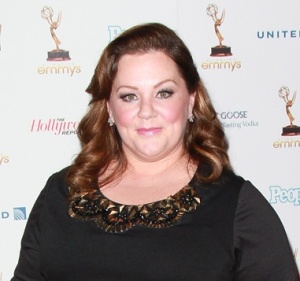 Can this problem of “the beauty myth” ever be solved so that women can enjoy their natural forms without fear of gaining weight or aging? Can we break free from predominant images that run our lives? If so, discourse must take place on a local and national level. Historically, whether a woman is trying to change her form externally through the corset, internally by restriction and starvation, or both, we have struggled to escape the constant bombardment of media images that set the “ideal” standard.

(Above: left and right: Melissa McCarthy & Adele, curvaceous and bodacious, challenge the stick-thin body ideals of the early 21st century.)

One thought on “Shifting Ideals of Beauty: A Visual Essay”