It’s 11:30 on a Sunday. I’m staring into some man’s back, a triangular sweat splotch just inches from my nose. The air is sticky, and I tilt my head upwards to find a breeze. Quick heartbeats thump in my ears, beginning to drown out the thrum of conversation.

“You okay buddy?” My friend, Taylor, brings me out of my dizziness.

“Is this your first march?” a woman asks. Her grey hair is bright against the mass of earth tone clothing.

“We’ll probably be here another hour before we even get into the march. I’ve been in the movement for many years,” she smiles proudly, and moves ahead into the crowd.

We stand for another forty minutes, and I start to feel a feint soreness in my knees. I imagine the stiff masses of legs around me, creating a rhythm of throbbing pain as we await the chance to march through midtown.

Later I would hear that there were upwards of 310,000 bodies feeling that same discomfort during The People’s Climate March. The veritable legion of activists (some fresh-faced and some veteran) closed down over fifty Manhattan blocks, and stood in solidarity with those marching in 166 other countries.

Early in the march, we came upon orange letters spread across a chain-link fence that read: “Unite the Struggle.” 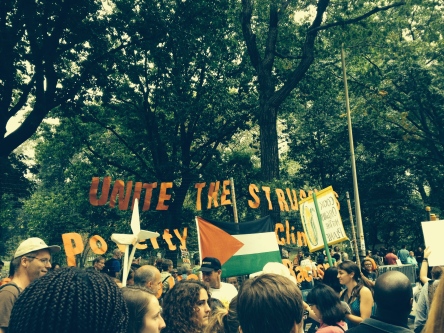 This was where The People’s Climate March diverged from other climate justice activism I’d been involved in. A call to unite the struggle signaled a recognition of the interconnectedness of racism, poverty, misogyny, homophobia, and all the other forms of injustice, which contribute to the destruction of our world. The multiplicity of persons and organizations marching on Sunday painted a much more complex climate justice movement than that of any issue-oriented demonstration in which I’d participated. This is not to say that the activists who tree-sit to prevent mountains being blown up in West Virginia, or risk arrest to physically shut down the Alberta Tar Sands are not invaluable. It is instead to acknowledge that the creation of a unified movement, in which all activists have a stake in each others’ work, is imperative to change our world. The People’s Climate March was a endeavor in unified activism.

And it is an endeavor because even as we may agree that climate change threatens our world, building coalition will always be a challenge.

My friends and I made the choice to vary our pace, and be a part of many organizations that, for one day, had found coalition. We walked behind the vegans, holding signs that questioned the integrity of meat-eating environmentalists. We danced next to the Hare Krishna group. We walked alongside the march to get a sense of its magnitude, and in the distance I could faintly hear, “¡La gente unido, jamás será vencido!” Later, we found the “friendly” fusion scientists, ready to take questions about their work. And after four hours of walking, we caught the end of The Raging Grannies’ song, “Corporations Run the World!” 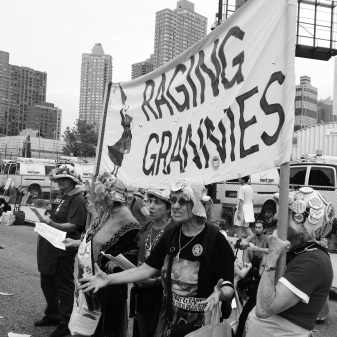 I started to feel the rhythmic aching again as I lay down to sleep that night. My legs were motionless, but there was a ghostly sensation that I was still walking among the hundreds of thousands; angry, driven, united.

*Erin Hagen is in her second year in the Women’s History Program at Sarah Lawrence College. She plans to teach History in a public high school before going back for a Doctorate in Education. In her spare time, she likes to read feminist sci-fi and coming of age novels, or go for a run with a friend.