Here’s a fun fact for anyone who doesn’t already know this about me- I’m kind of into tattoos.  I may not have a ton of them (yet) but I love looking at the work of different artists, and learning about the history and community of tattooing.  When I moved to the New York area just over a year ago, I was elated by the thought that so many amazing artists were now just a train ride away from me.  Since I’ve been out here, I found the work of Ashley Love, a tattoo artist currently based in Brooklyn.  I was first tattooed by Ashley last December, and have continued to follow her work ever since.  Not long ago, I found out that she and her friend, Jessica Pilar, were organizing a flash tattoo event to raise awareness about sexual violence and assault.  I had heard of flash events for Friday the 13th or Halloween, but the idea of such an event held to raise funds and awareness about a social issue was new to me.  As more information was released about the event, called Still Not Asking For It, I became more and more excited about the idea.  I decided to reach out to the organizers to find out more, and recently had the chance to ask Ashley some questions.

First of all, would you mind explaining, for those who have not attended a flash tattoo event in the past, what they can expect when they arrive?

Sure. Flash tattoo events are usually a celebration of some sort. So there are a lot of positive vibes shared between tattooers and tattoo enthusiasts. There is usually a theme, be it Friday the 13th, Halloween, Valentine’s Day, etc. A page of flash (or a few) is prepared, according to theme, and tattoo enthusiasts await the event 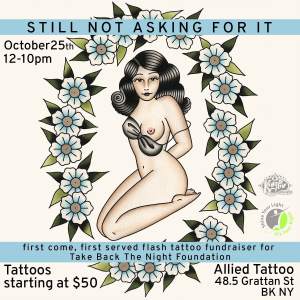 day, anxiously to see the new designs! On the day of an event like this, tattoo enthusiasts/supporters will show up, view the flash designs, and sign up on a wait list to get tattooed. There might be an estimated wait time given, but sometimes this is hard to say when it comes to tattoos. For this particular event, we have a number of neighboring businesses who have joined us to make the day great. Black Rabbit Barbershop around the corner is donating all proceeds from walk-ins during the event, and Montana’s Trailhouse is donating a drink ticket to everyone who gets tattooed! ….anyways, once the call is made and the person returns, they will have a short wait to sit down in the hot seat and get their tattoo of choice! While some people may find “flash” to be generic, and without personal identity, I feel like that can actually be a great thing. When getting a flash tattoo at an event like this, you are coming together with your community to make a stand and push forward. A cute/cool/fun tattoo can be such a wonderful token from an effort like this. Unity should be glorified in this instance.

How long has this event been in the works?

I believe I came up with the initial idea, and texted my girlfriends about it in early August. With busy work schedules and previous travel plans, it has been a slow process since. It has also been a learning process, as neither Jessica nor I have ever organized an event quite like this in the past. Still Not Asking For It is shaping up to be notably bigger than any flash event I’ve organized in the past. (Which is such a great thing!)

What types of tattoos can people expect to see on the flash sheets? 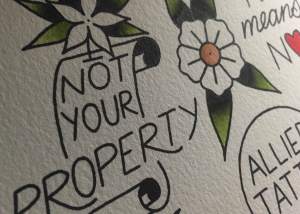 There will be a variety! We have come up with a handful of designs which speak directly to the issue, and make a bold statement of one’s right-of-choice … And there is also a strawberry! I’ve tried to make sure to have a good amount of themed choices, as I think a tattoo is a great way to make a declaration of this sort. However, I also wanted to have a plethora of designs for people who want to come and support, but don’t necessarily want such a statement tattooed on them.

What made you choose Take Back the Night as the organization to receive the funds raised?

Besides raising funds for this organization, what do you hope to accomplish by holding the event?

I think that there is a huge issue in the way that sexual assault and rape is viewed and addressed. Too often, these issues are treated as a “mis

understanding” or they are dismissed in some other way. Not only have I experienced this personally, but I have also witnessed it around me. This event is an opportunity for me to stand up and say that this treatment is not okay, and is not accepted. It is an opportunity for everyone to come together and take a stand. In addition to making a statement, I believe this event is a great opportunity for survivors to move forward in recovery. Tattoos are a fantastic way of stating claim of one’s own body. This can be very beneficial to the healing process which follows such terrible events.

Can we expect more events like this in the future?

I would love to be able to organize more events in the future. I will be moving to Salt Lake City at the end of this year, so maybe I can pass the torch in NYC, and spread the event out west next year!

What is the best way for someone to help out even if they can’t come get tattooed?

Take Back the Night is always accepting donations online at http://takebackthenight.org/donate/  & I have also set up a pre-sale of a print I have made for the event. The listing for that is here: https://www.etsy.com/listing/251129213/still-not-asking-for-it-presale all proceeds of the print sales will be donated to Take Back the Night, along with the money we raise on October 25th!

***Still Not Asking For It will take place this Sunday, October 25 between 12 and 10 p.m. at Allied Tattoo in Brooklyn.  If you’d like to find out more about the event, you can visit the event page and group page on Facebook.