An engraving of the story of Margaret Garner, from Harper’s Weekly in 1867.

Well for starters, Happy Black History Month! May this month, and every other month, remind us of where we come from and what we can do in order to honor the stories of those who are often forgotten. History comes from many different places and is rendered in many different forms. The different ways in which history is communicated is what ultimately inspired this piece. You’re all familiar with Toni Morrison’s Beloved, correct? If not, go read it (duh) but the focus of this article is not to encourage you to read the novel. The purpose of this article is to get back to the roots of historical fiction. At face value, the genre of historical fiction is a bit of an oxymoron. To be fictional, in any way, eludes to the idea of falsehood; alternatively, history is rooted in factual evidence, all of which can be proven. So where does a story stop relying upon history in order for the imagination to take over?

Beloved focuses on the story of Sethe, a runaway slave woman and mother from Kentucky who seeks refuge in Cincinnati, Ohio prior to the Civil War. While the novel is historical fiction, there is an element of history that warrants deeper analysis: the story of Margaret Garner.[1] It is important to say her name because historically, it matters as the slave narrative portrayed throughout history is rarely from a mother’s perspective. Furthermore, women are often erased from this narrative entirely. In this instance, the story of Sethe, the runaway slave woman, is based upon the factual story of what Margaret Garner endured at the hands of her white slave owners. After escaping the plantation of Archibald Gaines in Kentucky, Margaret and her family traveled about 16 miles crossing over the Ohio River into Cincinnati. Days after escaping Federal Marshalls surrounded the house of Joseph Kite, Margaret’s cousin, in pursuit of the Garner family. As the marshalls approached her, the mother of four made the decision to attempt to take the life of her children rather than allowing them to return to slavery. [2]  Margaret attempted to kill all four of her children and herself, however, only her two-year-old daughter succumbed to her injuries.[3] [4]

It is easy to read Beloved and be captured by Morrison’s ability to bring history to life, but Margaret Garner had a life too. One can simply read the book and appreciate it for what it is, but I encourage readers to be thoughtful enough to dig deeper. Margaret Garner attempted to kill her four children rather than allowing them to be subjected to life on a plantation, and that should tell us something. Now, I don’t have children yet, but can you imagine the pain that Margaret must have endured throughout her life as a slave that made death seem like a better option for her children? This is the “historical” in historical fiction, and it is imperative to remember that these renderings are based on the truth of someone else’s story. 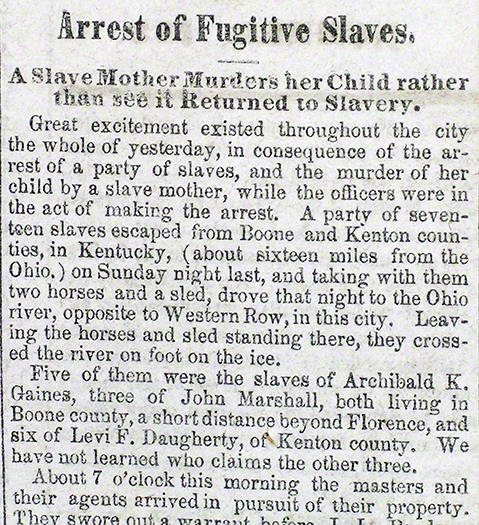 Margaret Garner’s story did not stop after the death of her two-year-old child. Garner’s case went on to trial, not for killing her child, but for being a fugitive slave. [5] [6] To be tried for murder would establish Garner as a free woman, something that her attorney, John Jolliffe, fought for. However, in the eyes of the court, Margaret was the property of Archibald Gaines. As such, Margaret, her husband, and her remaining children were detained, and charged as fugitive slaves and were transported to a plantation owned by the Gaines family in New Orleans, Louisiana. En route to New Orleans, it is thought that the steamboat carrying the Garner’s, the Henry Lewis collided with the E.H. Howard, sending Margaret and her infant child overboard.[7]  Although Margaret survived, she again suffered the loss of a child at the hands of slavery. Margaret Garner never obtained her freedom. She died on a Mississippi plantation in 1858 from typhoid fever but one could argue that her story, in part, led to the Civil War that broke out only a few years later. The trial of Margaret Garner went on for two weeks, which was longer than most and due to the circumstances, the trial drew large amounts of newspaper attention. [8] During a time when abolition was at the forefront of people’s minds, a case like that of Margaret Garner only added to the escalating conflict between the North and the South.

Margaret Garner’s story is important, not just in the context of Beloved, but also in the context of American history. Historical fiction is rooted in history, and in order to fully understand the text at hand, readers must think beyond the fictional component of the story. In an article written about Richard Danielpour’s theatrical rendition of Margaret Garner’s story Toni Morrison says the following, “The interest is not the fact of slavery, but of what happens internally, emotionally, psychologically, when you are in fact enslaved and what you do you do to try to transcend that circumstance. And that really is what Margaret Garner reveals,”[9] Morrison was inspired by the story of Margaret Garner, but from the above quote we know that her focus was not on the historical component but rather the emotional toll that slavery took on one woman and her family. However, Morrison’s focus  does not negate the history embedded in her writing. Going back to the historical roots of Beloved forces one to think about what it would be like to choose between enslavement and “freedom” by death. For every slave story, choices were made that were contingent upon the time in which one lived. One could never judge the actions of Sethe without knowing the reality of what Margaret Garner lived through. During Black History Month, at a time where racism is still alive and well, put yourself in the shoes of Margaret Garner. Ask yourself what you would do when stuck between two evils. As you read Beloved, or any other historical fiction novel, always remember there is in fact history in Historical Fiction.

[4]  If you have read the book, then you know that her husband witnessed all of this.

Madison is a second year Master’s Candidate in the Women’s History program at Sarah Lawrence College. Her research interests include Civil Rights activism in Cleveland, Ohio, and Black women’s activism in the United States.