Earlier this month, the official filmed version of Broadway’s Hamilton premiered on streaming platform Disney Plus. This production fits our blog’s theme of “revolution” in several ways. Not only does the plot retell some key moments of the historical Revolutionary War, but it relies on nonwhite actors to do so. As I wrote in a previous post about Broadway’s Slave Play, theater at this level all too often features white stories told by white actors, often only accessible to white, privileged audiences who can afford high ticket prices. During the original run on Broadway, it also made live theater accessible with regular “Ham4Ham” lottery performances. [1]

As with most traditionally in-person activities, theater has looked quite different in the age of COVID-19. How can we continue sharing space together when being in that space could put those we love in danger? Many artists have utilized digital platforms, like Zoom, to host virtual play readings, playwriting festivals, or even provided online access to streamable plays. Hamilton’s premier on a major streaming platform suggests how valuable artistic content is. In uncertain times, we turn to storytelling. It is not merely entertainment; it is validation, it is release, it is comfort. Providing a filmed version of a live theater performance also feels revolutionary. In a moment where so many artists are uncertain about their futures, Hamilton provides a glimpse into one way for theater to move forward.

Despite the excitement of theatrical work being widely available to stream, there are many debates regarding Hamilton, particularly among historians. “Why didn’t Lin-Manuel Miranda include x detail? How could he ignore x issue?” One Los Angeles Times article by Laura Zornosa sums up much of the opposition found on Twitter. Users rightfully question the lack of representation in areas such as slavery, Indigenous history, and gender. While some of these topics are merely mentioned, others are left out entirely. Although some have decided that these exclusions are worthy of “cancelling” Hamilton, I feel that cancellation is a too-simple answer for a more complicated issue.

Of equal importance to the criticisms mentioned above is the medium in which Hamilton is presented. Some individuals want to sort Hamilton into one of two categories: history or theater. The truth is, Hamilton exists somewhere between history and theater–not quite at the edge of the spectrum for either category. It is meant to be messy. If it were meant to follow the rules of its source material, we’d see a stage full of white actors with what I can only imagine would be far less innovative songwriting. Is it fair, then, to judge Hamilton the production only for its historical accuracy? Is it fair to judge the history of Hamilton only on its ability to be dramatized? We cannot have one without the other in this case.

I must admit my bias. I think theater is an excellent tool for making history accessible and sharing stories that typically wouldn’t be highlighted in a text book. Historians of all types need to think creatively to make sense of their evidence, but I think we could all benefit from more creative presentations of that evidence. What can a play or musical accomplish that a more “traditional” historical retelling might not? What is the role of art, specifically performing art, in history?

One opinion on this topic I find valuable is of filmmaker Ava DuVernay, who is perhaps best known for her documentary 13th. In several screenshots from her Twitter feed, she expresses an idea I struggled to put succinctly. First, she acknowledges the disconnect between Hamilton, the fictional character, and Hamilton, the actual person:

Below her, another user replied: 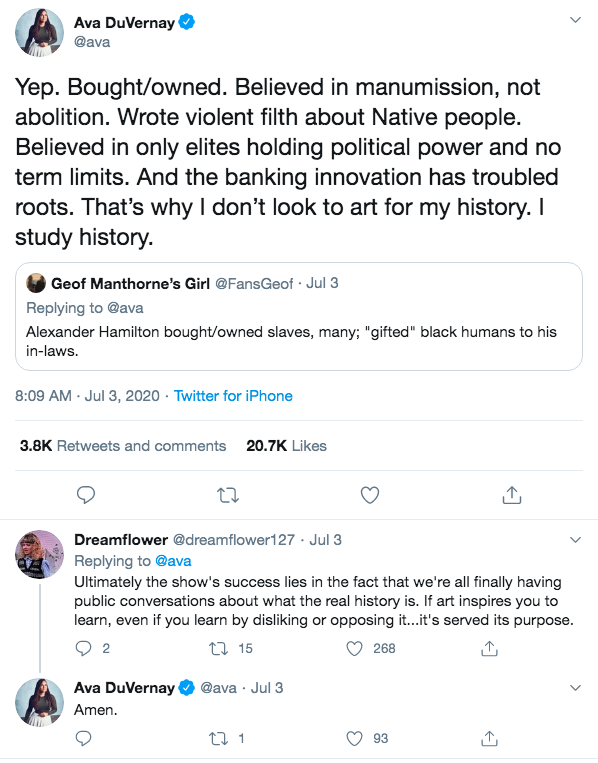 Finally, in response to a follow up question, DuVernay had this to say: 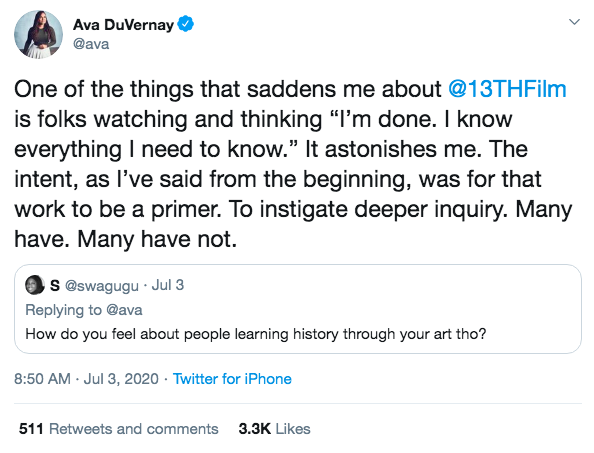 DuVernay’s tweets and their replies note that art based on history is not meant to serve as an all inclusive lesson, but a doorway to further learning. Its job is to evoke a desire to learn more, whether that be out of admiration or disgust for the topic at hand. Art that has provoked in this way can therefore be considered successful art.

What Hamilton conjures is a specific type of memory regarding history, what memory studies scholar Alison Landsberg describes as prosthetic memory. Prosthetic memories are memories gained through viewing media; they allow a viewer who did not experience an event to create a new memory based on the version of events presented in said media portrayal. They “are not natural, not the possession of a single individual…they conjure up a more public past, a past that is not at all privatised.” [2] In this way, the past becomes much more accessible to wider audiences. It doesn’t take a college course on history for one to understand what’s being presented. Furthermore, consuming a film or theatrical production is often a more dynamic experience than something like reading because it requires the viewer to use multiple senses to absorb information. It doesn’t necessarily require the viewer to understand specific language on a page, but to understand the emotions the story makes them feel.

Prosthetic memories rely on the viewer’s ability to empathize with what they have seen, whether that is onstage, onscreen, or within the pages of a book. It is the hope that by presenting audiences with these stories they will be able to go out into the world and apply what they have learned to think more critically about the world around them. The job of the audience does not end as the credits role or the stage lights darken; it is continuous.

I feel that this has sometimes been lost in translation. Many people want to view, but too few viewers want to put in the work that viewing often requires. To passively consume, to never think beyond the face value of media is to become complacent in what someone else is saying. In order to truly understand the art we are presented with, we have to look further and think harder. Watching a single movie or attending one play does not mean we know everything there is to know about a topic.

Prosthetic memory has the potential to be used as an educational tool. While it is indeed an accessible way to communicate history, the success of prosthetic memory is not possible without audience participation. As we continue to navigate media during the current health crisis, I encourage you to think about how you consume. Do you view media as “one and done” or do you seek more information afterwards? Whose stories are you consuming? How are you getting the stories? The information afterwards? Asking yourself questions about what media you consume can make you a better viewer and a more critical thinker, something we must all keep in mind as our world becomes more saturated with content.

For further reading on some of the topics I discussed in this post, I would like to recommend the following articles:

Lastly, this link provides information on how to take simple steps to demand an extension of Pandemic Unemployment Assistance, which is crucial to those in the performing arts community as they navigate cancelled productions and uncertain job opportunities. If you enjoyed Hamilton, please consider signing a petition or completing some of these actions to help the unemployed artists who made your entertainment possible.

[1] For many shows, fans could enter their name to win one of approximately twenty one front row tickets for only $10. Thus, a Hamilton ($10) for Hamilton, or Ham4Ham. Before names were drawn, near the stage doors, hundreds of fans would gather for performances featuring the cast of Hamilton as well as surprise guests; often these guests were friends of performers or members of other Broadway casts. These events make Hamilton doubly accessible; having these $10 tickets allows those who typically would not be able to afford such a sought after seat to quite literally be “in the room where it happens.” Additionally, providing the sidewalk audience with a performance (regardless of whether they had entered the lottery or not) allows more people to be exposed to the arts (and Broadway-level performances) without the cost. For more information on Ham4Ham, I recommend this article.

[2] Landsberg, Alison. “Prosthetic Memory: the Ethics and Politics of Memory in an Age of Mass Culture.” In Memory and Popular Film, 144–61. Manchester University Press, 2003. 149.

Rachael is a Midwesterner at heart beginning her second year as a Women’s History MA candidate at Sarah Lawrence College. Her thesis work will complicate the notion of the feminist wave and the construction of feminist icons while exploring the influence of the Riot Grrrl network of the 1990s in more contemporary forms of feminist activism. Some of her side interests include women’s rage, performance studies, and “cancel culture.”