Over the course of the last semester, I have spent my time researching the Equal Rights Amendment (ERA). “Equality of rights under the law shall not be denied or abridged by the United States or by any State on account of sex.” Harmless, right? Well, a lot of people, particularly Phyllis Schlafly and STOP ERA, begged to differ.

Even so, before the U.S. Senate deliberated on this issue, many women and men had something to say about the Equal Rights Amendment and what it meant for them. Given that this debate happened most notably in the 1970s, it isn’t so easy to access first-person accounts or testimonials of the time about the ERA. So, I looked for the text of the legislative hearings. You can’t get that from the Library of Congress online. The earliest mention of the ERA in the C-SPAN video library is 1980, and that is past the height of the debate. Hearings were however printed in a book available in SLC’s Esther Rauschenbusch Library.

You may not have used it, but there is a vast collection of government documents in our library, which includes that book chronicling the ERA hearings. Our library is part of the Federal Depository Library Program. At SLC, we have several bookcases worth of material, in addition to online guides of digitized materials. So, if you are studying American history, these resources might be useful to you!

As women’s history students, we have been taught to read “’against the grain’” (Bartholomae and Petrosky) because history has often excluded women, girls, people of color, and other people who have been marginalized in multiple and intersecting ways. We have been taught to investigate what has been written about women, for example, and what hasn’t. Where do their stories appear and not appear?

Let’s put that to work with our government documents section. In some cases, we may use government documents for basic information to include in our writing. For instance, we may want to know the population of Hartford, Connecticut, in 1980, and we would look at the U.S. Census for that information. However, as historians, we might also want to question that data. What methods did the U.S. Census Bureau use to get its count? Would these methods have led to the exclusion of X or Y group of people? How would their exclusion from the Census count affect public policy and thus quality of life? What questions did the Census not ask that it should have?

Do yourself a favor and visit the government documents section in the basement of our library. A browsing visit may lead you to documents about which you will raise questions, and you may be inspired to find the answers! Perhaps, those answers will become your master’s thesis!

In addition to bound hearings and reports, you’ll also find maps, videos, discs, and other resources! There’s content that covers substance abuse, NASA, foreign affairs, and the nuclear issue, among other things. Check out some of these interesting finds in the stacks! 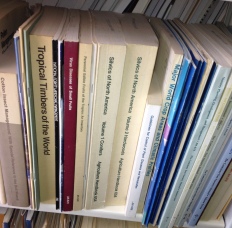 Plant and agricultural reference books, such as Silvics of North America, Volume 1 Conifers and Virus Diseases of Small Fruits 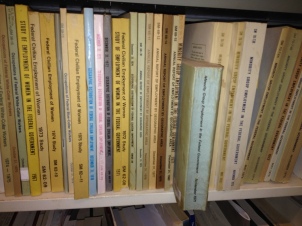 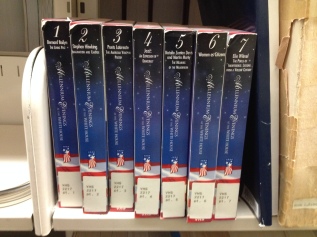 Videos from events at the Clinton White House, including Millennium Evenings at the White House: Women as Citizens.

Copies of the Federal Budget galore!

Public Papers of the Presidents: Barack Obama. Read the speeches and remarks of our current president, as printed in these volumes.