There is a trend in comic book art to make women look as sexy as possible: from their clothes, to their hair, to the very position of their bodies. The most famous of the poses women are contorted into is called (and pardon the language): the “tits and ass” pose. This form is exactly what it sounds like. The female body is twisted so that the breasts and butt are both on display for the viewer’s gaze. To achieve this stance and many other “sexy” poses, however, anyone with an understanding of how the human body is constructed will notice that comic book artists have deleted some key parts of the human anatomy, such as: spines, ribcages, internal organs, and hipbones.

If the problem with this transformation of the female body is unclear, allow me to explain. While these are superheroes and there is a certain amount of creativity that artists can take with their renderings, male superheroes are not intentionally drawn in this manner. Spider-Man, Superman, Iron Man, and Captain America are drawn, for the most part, anatomically correct. Unless it is a recent update that I have missed, Cat Woman, Storm, Wonder Woman, the Scarlet Witch, and other super-heroines do not have super-bendy spines and disappearing bones in their cache of superpowers. The only character that should be drawn in Exorcist-like poses is Reed Richards aka Mr. Fantastic, whose superpower allows him to stretch and contort his body. The distortion of women’s bodies feeds the unrealistic ideals that their bodies are held up to in western society, and is a major source of disenchantment for female fans (who make up the comic book industry’s largest growing consumers).

A recent and prime example of this distortion is present in the variant cover art for the upcoming new title Spider-Woman #1. When Marvel announced that in November of this year, they would be releasing a new solo comic for Spider-Woman (Jessica Drew), female comic fans were elated.[1] This comic emerges as a part of Marvel’s equality initiative (the same campaign that the new female Thor and black Captain America formed from) in an effort to be more inclusive toward their non-white, male, cisgender, heterosexual audiences. With Marvel being so keen to appeal to women, it confused many people when the variant cover art for the first issue was released and viewers saw this: 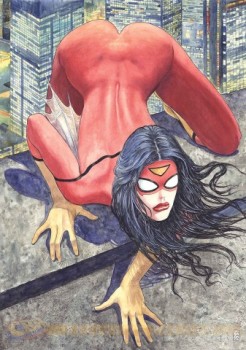 In case it is not clear, in this image, Spider-Woman is meant to have just leapt onto the roof of a building, one leg hanging still over the ledge. Why is her butt in the air for this maneuver? Why is her suit digging into the crack of her butt? Why is her head tilted backwards at an impossibly acute angle? Well, according to the artist, that is just how the female body works.[2] Milo Manera, the artist in question, was an odd choice to begin with for a comic meant to appeal to feminists, as his usual work is drawing for erotic comics with male audiences. The image made women everywhere wonder what in the world Marvel was thinking when they allowed the image to be released. But do not fear. Women did not simply let the ridiculousness of this drawing go unnoticed. Instead, they got creative.

Among the litany of critiques that emerged on the cover art, which ranged from memes, tweets, and parodies, to a horrifying 3-D rendering of the pose; is a video by Alice Dranger, a gymnast.[3] Dranger and two other female gymnasts attempt to recreate Spider-Woman’s pose by leaping onto a faux-skyscraper ledge made of floor mats and freezing in the position they land in to see if women’s bodies do in fact work in the way that Manera draws. To no one’s surprise, not a single gymnast landed in Manera’s stance. If three adult, trained female athletes cannot replicate the pose, it seems highly unlikely that any woman, including a super-heroine could either.

Another response came from artist Karine Charlebois, who runs a tumblr blog, Less Tits N’ Ass, More Kickin’ Ass, and uses her artistic skills to transform women’s unrealistic poses in comic books into the anatomically possible.[4] Charlebois’ blog and other blogs like it are different from the “Hawkeye-Initiative,” which draws the superhero Hawkeye in the poses and outfits of super-heroines to note their absurdity, and has received backlash for mocking femininity.[5] Charlebois does not alter the women’s costumes (no matter how impractical they may be), and she keeps the poses as similar to the original as possible, only altering them so that they correctly reflect the flexibility of real human bodies. Her alterations show women can be drawn in ways that are anatomically correct, yet still display plenty of the breast and butt areas of which comics seem to be so fond. Her re-imagining of the Manera cover loses none of its eroticism, yet puts Spider-Woman in a stance that is physically possible: 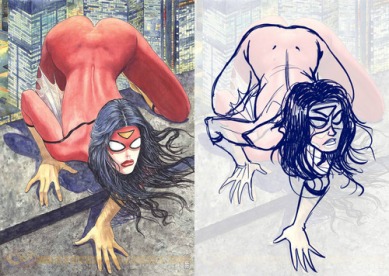 It seems that this bombardment of criticism may have made Marvel see the error of their ways. Manera was scheduled to do two upcoming variant art covers for X-Men and Thor (the new, female one). Yet, as of September 23rd, Manera has been conveniently removed as the artist for these covers due to scheduling errors.[6] The removal of his art from these future comics gives hope that female comic fans have the ability alter the superhero landscape one pose and cover critique at a time. Above all else, one thing stands to be glaringly true, women comic book fans refuse to be silent in both their passion for the genre, and their criticisms.

*Kaitlyn Kohr is a second year student in the Women’s History Program at Sarah Lawrence College. After Sarah Lawrence, she plans to go to school for a Doctorate in Art History and one day work in an art museum. Her hobbies include becoming overly invested in the lives and treatment of female comic book characters, exploring museums, watching British television shows, and reading about representations of women.